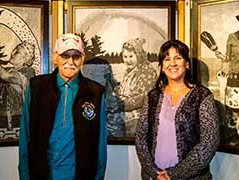 In 2016, the Ancestral Women exhibit was showcased in Wausau at the Center for Visual Arts. Vickie Ackley and her father, Fred Ackley, Jr., attended the opening of the exhibition, and viewed the weaving of Vickie’s Great-Grandmother Alice Ackley Randall.

“After the exhibition, I started thinking about what my Great-Grandma had to go through and how she felt growing up. We take advantage of every day comforts, and she had to transition from her world. I wondered what it was like for her. She’s a little girl; her heart is happy and pure. She’s growing up in the old ways, the natural way of living. Everything is still natural,” Vickie remembered. 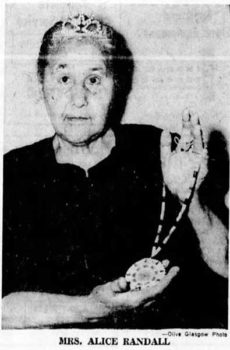 Photo by Olive Glasgow From the Green Bay Press Gazette

Alice Ackley Randall was born near Lake Metonga in 1899. “She was raised in Crandon, which was just being established as a city. She had to be flexible, learning the old traditional ways but having to learn the colonization ways too. About the age of eight, the government was taking children and placing them in boarding schools. My grandma went to a boarding school to learn English. She only knew her language, and shared that she could still feel the sting on her face at that young age for talking in our language,” Vickie continued.

“I only knew her for the first eight years of my life; she passed on in 1978. At that time, we lived in Milwaukee, but we were always coming up north. We were always going by ‘Grandma Woods.’ Driving up to her house, the driveway seemed forever long with pine trees. It’s funny how I remember certain things. We’d see the old green shack, and pull up to her humble little home, and it was the best, safest feeling. She had tons of raspberry bushes. She would make us pancakes. Her old table had sturdy white benches. She would fry fish with the skin on – it was scaled but she fried the whole fish. It was an authentic fish fry and it was delicious. She would sing us songs, and I always felt happy around her. It was pure love.”

“I jotted notes as I wondered what her thoughts were. She had to learn to go to school. She was growing up in our traditional ways, but was being forced to live another way. That’s what my grandmother had to endure. I wondered what her thoughts and feelings were. She married and moved to Antigo. When her husband was hurt on the farm, the Chief shared that there was a house available for her on the reservation. She lived the rest of her life on the reservation. An article I read said that she said she didn’t harbor any bitterness, and used her schooling to help our Tribe become established. She was the sister to our last Chief, Chief Willard Ackley, and they worked together for the benefit of our community. The Chief established a treaty for our reservation to be federally recognized, and because she had the education, she recorded everything. She was the Tribal Secretary for many years.

“These were the thoughts I was having when, in June a week before my dad passed, I got a phone call from Tinker Schuman. She and Carol Amour were working on a presentation that would include photos of the weavings, and they wanted to meet with me to talk about participating in a new presentation. They wanted me to speak about my Great-Grandmother. While I was nervous about public speaking, I wanted to honor her.”

The events were held in Milwaukee on November 9th and November 10th. The rehearsal was held at the Indian Community School on Friday, and the performance was held at the Milwaukee Public Museum on Saturday in conjunction with the “A Tribute to Survival” exhibition.

The timing was challenging for Vickie. “It was election time; I’m very involved in a recovery program and had things to do. But I wanted to make sure everything was done as best as possible. I researched, finding articles in the Green Bay Press Gazette, and found writings by my father. I was so excited to do this. I began by presenting the journey of how she grew up, and how she transitioned with boarding school, and by sharing her experiences.”

“The Indian Community School was beautiful. We were in a meeting discussing the presentation, and as I talked about how my Grandma was forced to learn English, I hear over the loud speaker announcements and ‘Miigwetch’. It was so cool! The kids that participated in the presentation introduced themselves and they spoke in our language. I thought they were so lucky, and that it sounded so cool. They were so privileged to learn the language.”