In the early autumn when the leaves begin to change color, the members of the Sokaogon Chippewa Community make their way to Rice Lake, one of the remaining ancient wild rice beds in the state of Wisconsin. The annual harvest of wild rice, an essential part of the Native American diet, has altered very little in the hundreds of years that the Community has lived here.

Family clans migrated from eastern Canada to Madeline Island a thousand years ago, led by a vision that their journey would end in a land where the "food grows on water" - Manoomin or wild rice. The Sokaogon Chippewa Community's journey ended here in this area of abundant wild rice. 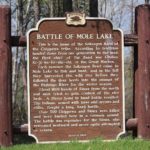 Competition from the Sioux resulted in the Battle of Mole Lake in 1806. Today there stands a marker on Highway 55 in Mole Lake to mark the battleground where more than 500 warriors were slain in fierce hand-to-hand battle.

Sokaogon means "Post in the Lake" people, because of a spiritual significance of a post, possibly the remains of a petrified tree, that stood in nearby Post Lake.

The Sokaogon Chippewa Community is also known as the Lost Tribe because the legal title to the 12 mile square reservation from the treaty of 1854 was lost in a shipwreck on Lake Superior.  Under the provisions of the 1934 Reorganization Act, 1,745 acres of land were purchased for the Mole Lake Reservation. In 1930, a roll had been taken in the Mole Lake area and 199 Native Americans were determined to be in the Band.

According to Tribal history, Tribal Members were promised this land by a treaty signed with President Franklin Pierce. The agent, who was to confirm the treaty and secure the land for them, drowned on his return trip from Washington. The Tribe, under the leadership of Chief Willard Ackley, finally and after a long struggle, received federal recognition and reservation status in 1937.

To this day, the Tribe actively pursues any knowledge or document to support their claim to the original treaty lands.

The Sokaogon (Mole Lake) Chippewa Community enjoys three beautiful lakes either on or adjacent to the small reservation: Mole Lake, Bishop Lake and Rice Lake, which lies at the headwaters of the Wolf River.

The Casino is open every day.

The Mole Lake area boasts hundreds of miles of snowmobile trails, hiking and mountain biking trails, ATV/UTV trails, and cross-country ski trails. There are over 800 lakes, 82 trout streams and 400,000 acres of public wilderness land teeming with wildlife in the vicinity.

If you are looking for bald eagles, they are easy to spot soaring above Mole Lake and nearby lakes and streams.

While you're in the area, be sure to explore and experience the Nicolet-Wolf River Scenic Byway. The Byway is a 145-mile route traversing parts of the state’s north-central counties of Forest, Langlade, Oneida and Vilas. Here you’ll discover communities where life moves at a slower pace and centers around time-honored traditions and values.

Chief Ackley, the last hereditary Chief of the Sokaogon Chippewa, was born on December 25, 1889, in a traditional Ojibwe wigwam along the shores of what the old people called "Dry Lake" (now called Bishop Lake).

Before his passing, Fred Ackley, Jr., a nephew of Chief Ackley, shared, "The thing about Chief Ackley is, he wasn't voted in as Tribal Chairman. He was chosen by the people the old way - he came to us down through heaven, through the sky, and was put here as an Ogema (Ojibwe word for Chief)."

Chief Ackley was regarded as an expert in many Ojibwe customs, from the use of traditional plant medicines, to hunting and fishing, to the creation of birch bark crafts. He taught many in the ways of the natural laws. He was also an ambassador of goodwill and advocated for the advancement of Indian people into the 20th century.

Fred spoke of the Chief's many deeds and desire to preserve the Sokaogon Chippewa culture, sharing, "He spent much of his life fighting to establish the Mole Lake reservation. He saw what was happening to Indian people here. He saw how his people were forced to move off their land.”

Thank you to Richard D. Ackley, Jr. (second from left) for this photo,
circa 1957 during official Tribal Enrollment activities.

The Treaty of 1854, also known as the second Treaty of LaPointe, established several Ojibwe reservations. Although this was to include the Mole Lake and St. Croix Bands, both were left without a land base and placed the people of each Tribe in peril. The Tribe, under the leadership of Chief Ackley, finally and after a long struggle, received federal recognition and reservation status in 1937.

Despite the seemingly insurmountable task, Chief Ackley continued his quest for repatriation for his people. In 1939, the Sokaogon of Mole Lake were granted 1,680 acres of reservation land.

"My brother, Willard, on July 5, 1966, made a proclamation, "I, Willard L. Ackley as the present and sixth Chief of the Sokaogon Chippewa Tribe and also known as the Post Lake Band, Lakes, Band, Pelican Lake Band and Mole Lake Band, do hereby make this proclamation to my people, members of the Sokaogon Chippewa Tribe, old and young alike, never at anytime take termination on this 1850 acres of land held in restricted status by the United States of America but given to us by the President Franklin D. Roosevelt, and Commissioner of Indian Affairs, John Collier, Washington, D.C. under the re-organization act of 1934. 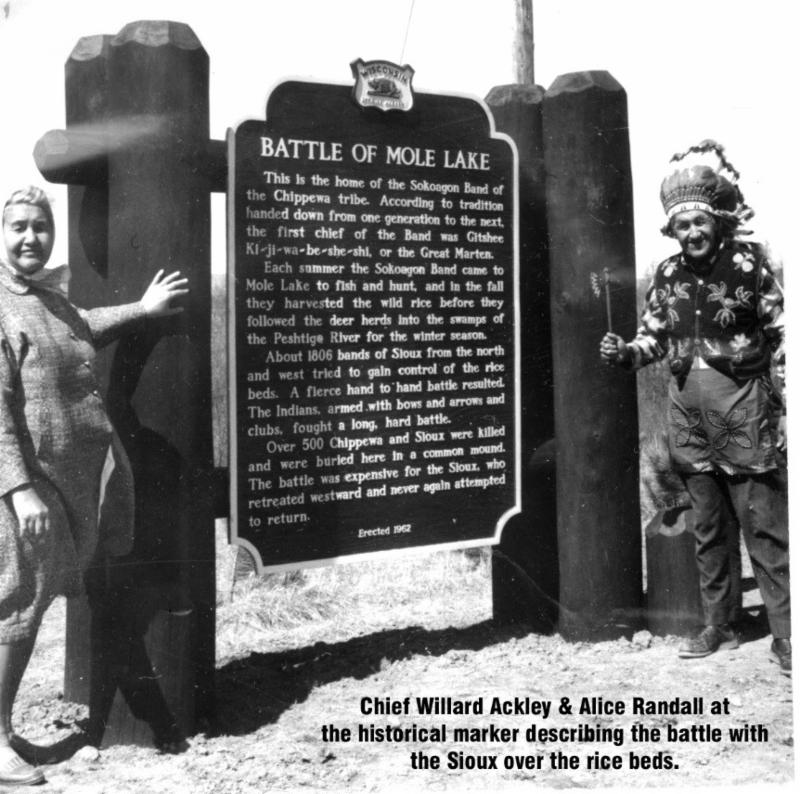 In 1962, with the help of his sister, Alice Randall, Chief Ackley was able to successfully apply for a Historical Marker retelling the story of the Battle of Mole Lake.

"He was a true leader of the people. He represented the Great Spirit, and everything that's good about Indian people," Fred said. "He taught myself and many others what it means to be a good person - to be a good human being. Through him our Tribe has survived."

Hear Chief Ackley tell a bit of history about the Tribe, as well as some words in Ojibwe and their meanings.

Recording from an unknown date.